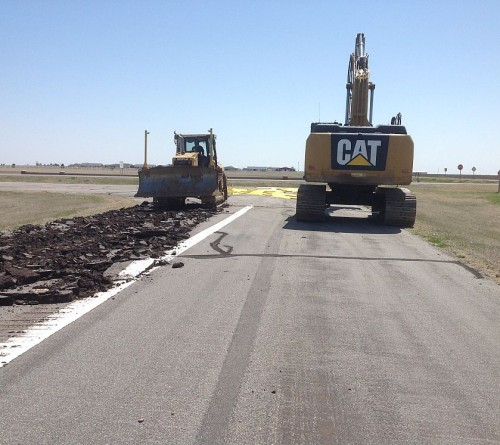 The City of Cimarron and EBH started planning well in advance to get funding from the FAA, as this is an intense process. Both the City of Cimarron and EBH were part of the strategy to get this project funded and built. Initially, the city had to acquire the land, which took several years, and then had to complete additional geotechnical work. Once the city secured the land, design was completed to get approval from the FAA. Once FAA approved the design, the project was bid and construction began.

During this project, western Kansas received an unusual amount of rain which for an agricultural community was welcomed but not from a construction standpoint. Typically, they receive 8 inches a year, but during the construction of this project, it was over 30 inches of rain.

Most land has some curvature and hills, but the land for the airport was unusually flat. Typical 4,000-5,000 feet long airport runways have 8-10 feet from one end of the runway to the other. In Cimarron Airport’s case, it was only a 1 ½ foot from one end of airport to the other. The problem isn’t necessarily the runway, but the issue of water running off the runway. To combat this issue, the contractor brought in dirt. The runway was constructed with a rock base and then concrete poured over it.