Algae problems can be especially severe in ponds with long detention times and high evaporation. This can cause a buildup of nutrients, which in turn causes algae blooms. In most ponds, algae forms a thick mat on the surface and Total Suspended Solids (TSS) can be reduced by drawing effluent from farther beneath the surface. However, in some ponds, diatomaceous algae thrives from the surface all the way down to the sludge layer.

I visited two lagoon systems where this was an issue, pulled samples, and ran them through filters. Some varieties of algae form large clumps or long strings and are easy to filter. Most of the algae from the lagoons I sampled did not form clumps or strings, and was in the 1 to 2 micron range (40 to 80 millionths of an inch in diameter). Such small particles would not be possible to remove with a conventional sand filter.

I tried adding alum to precipitate phosphate, an essential nutrient for algae. I tried killing the algae with ultrasound, hydrogen peroxide, and sunlight-blocking pond dye. Nothing had much effect.

Finally, I found something that worked. I ran an experiment with four identical samples of effluent – one with light and air, one with light only, one with air only, and one with no light or air. The LED light source was designed to be about the same intensity and duration as a typical Kansas day.

After one to two weeks without light, the algae would die off and result in a TSS concentration of near zero. Without the algae-produced oxygen, aeration is necessary to keep the BOD and ammonia levels from increasing. With air and no light, the TSS steadily fell. After an initial jump in ammonia from algae decomposition, the concentrations were near zero within two weeks. With full sunlight (with or without air), ammonia quickly dropped to zero, but TSS levels skyrocketed. Dissolved Oxygen (D.O.) levels remained at saturation in the aerated samples. In the sample with no aeration and full sunlight, the D.O. was higher than the meter could measure due to the pure oxygen supplied by the algae. Charts from the pilot study are shown below. 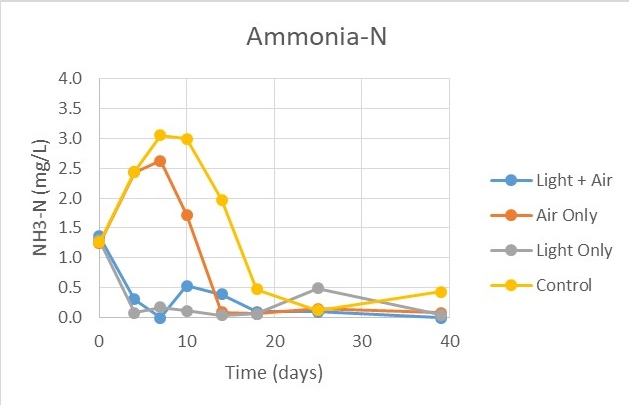 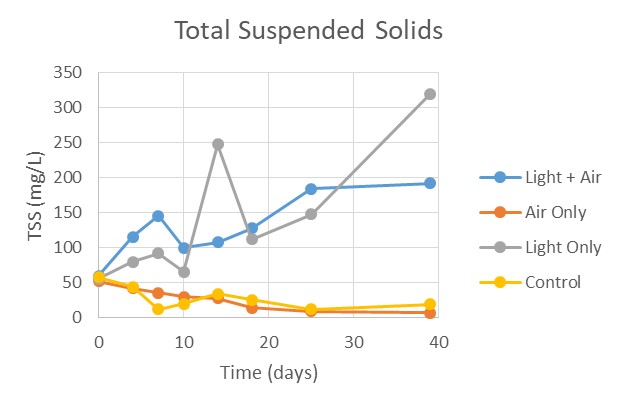 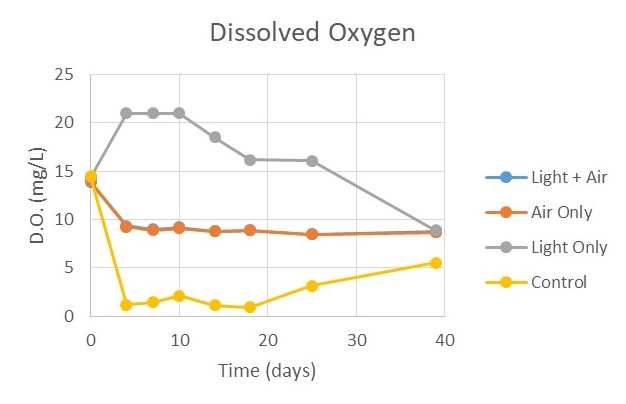 From the results shown above, it appears that the best way to eliminate algae is with a combination of shade and aeration. Without shade, algae will thrive and can result in TSS violations. With shade and no air, the TSS concentration will drop, but ammonia and BOD levels will increase as the algae settles to the bottom and decomposes. Shading and aeration may be a simple and effective way for more discharging lagoon systems to eliminate algae and consistently meet permit requirements.

Richard Ammel, PE, EBH Engineer, is a licensed professional engineer who has designed and inspected the construction of sewers, pump stations, and wastewater treatment systems for several small towns in Kansas. He received his Bachelor of Science (B.S.), Civil Engineering degree from Colorado School of Mines. Contact Richard if you would like to discuss your municipality’s waste water treatment challenges at 620-793-8411.

For additional information on this topic, contact us today!