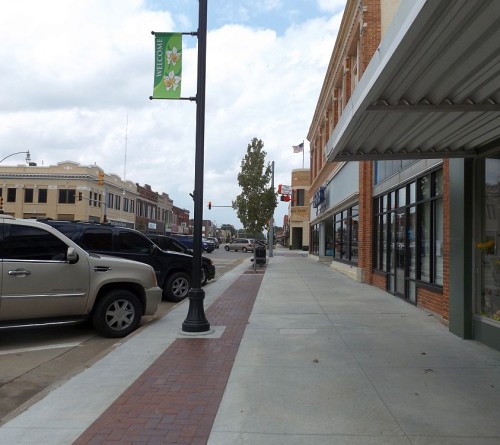 The City of Pratt and EBH have partnered together on several projects to make Pratt Downtown a better place for its citizens. Merchant Park, downtown streetscape, street improvements, and replacement of waterlines have all been part of the improvement of downtown. The area is more enticing and welcoming for the community and tourists.

EBH assisted with public relations during the downtown project to keep citizens and businesses informed about the project progress. Construction was scheduled to avoid the holiday, shopping season between Thanksgiving and Christmas. Weekly meetings with the city and contractor were held to communicate project progress and minimize delays. The salvaged bricks from Main Street were used in constructing part of Merchant Park.

EBH worked with KDOT to meet the KDOT Utility Access Policy in a utility congested area and met with KDOT staff prior to design to determine a workable and constructable plan. They also assisted the City with funding application using KDHE State Revolving Loan Fund.

From local programs to federal agencies, we can help you identify and secure funding for your next improvement project.

The City of Pratt partnered with EBH to completely rehabilitate the City’s downtown US-281 corridor over a 5 year period. The improvements spanned four separate projects. In total, over $3 million were invested into Main Street downtown.

EBH worked closely with the downtown business community (which includes EBH themselves) throughout design and construction to develop a plan that worked best for the businesses, the City, and the community. Most businesses preferred using alley access, and as such signs were fabricated directing towards the businesses with alley access.